As today was the last day of JSPSD2018, the final Capstone presentation took place. There were a few professors and staff from Tokyo Tech came to listen to the presentation. (Thank you for coming!) At the beginning of the class, first Brian-sensei made a brief introduction about the presentation to the audience, and then, five presentations were followed. 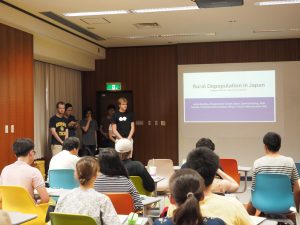 Needless to say, depopulation is one of the biggest concerns in Japan. But Japan is not the only country worrying about this issue. Many of the developed countries are facing/are about to face to deal  with aging society, and population decline has been threatening those countries one way or another. 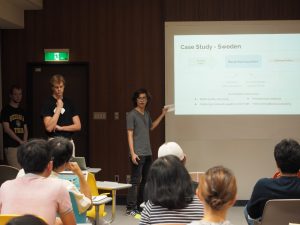 This group emphasized how the existing policies in Japan tend to focus only on economic aspect when it comes to solving depopulation in rural area. The group introduced a case study from Sweden as a successful example, and they showed us the importance of focusing not only on economics but also on quality of life in order to successfully deal with rural depopulation. A study from Sweden told us that it is hard to conclude the effectiveness of a certain policy as all municipalities face different prerequisites and there was no universal solution. This led to the conclusion that Japan should also pay more attention to the differences between different regions. They emphasized that Japan should implement a policy that is unique to a region and helps improve the well-being of individuals and societies. 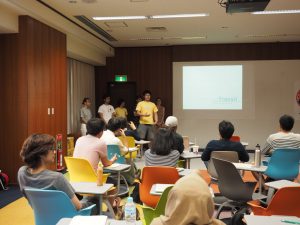 For their analysis of existing environment for disabled people, this group reminded us about culture of shame and Sagamihara stabbings. Japanese are afraid of making mistakes and being different from other people. Having this culture, being a disabled really makes it hard to blend into society. Sagamihara stabbings was an extreme case occurred  in 2016. A man with a hammer broke into the care center in Sagamihara and killed 19 people and 26 people got injured. The attacker of this incident reportedly told police that he wanted to get rid of the disabled from this world. While this incident was the worst mass killing since WWII, it received so little attention. This incident together with culture of shame really showed us how disabled people in Japan continue to face prejudice, social isolation and violence.

Having those as a background, this group focused on improving transportation accessibility for those disabled people. They saw the lack of information as one of the crucial issues in order to improve the environment for disabled people, and they recognized the necessity of raising awareness towards the issue and coming up with solutions. 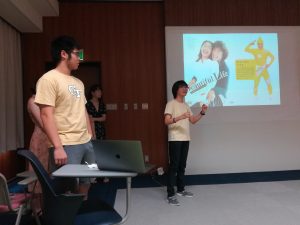 The group concluded their presentation with a following quote from Stella Young, an Australian comedian, journalist and disability rights activist.
-My disability exists not because I used a wheelchair, but because the broader environment isn’t accessible-

Japan continues to have an ambivalence toward people with disabilities. Having the Olympics in 2 years, and aging society, it is clear the needs for a better environment for disabled people keeps increasing.

3. The Sustainable Future of the Olympic Games 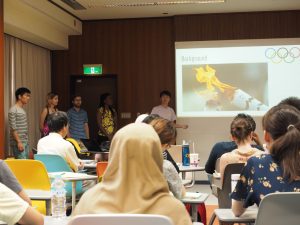 Tokyo is hosting the Olympics in 2020, exactly 2 years from now. Just a few days ago, the Olympic mascots as well as the chief executive creative director were officially announced. In the news, social media, conversation, the Olympics has been a popular topic in Japan these days.

This group chose such a trendy topic for their presentation and looked at sustainability of the Olympics. As it was shown in the increase number of cities withdrawing from the race for hosting the Olympic, there is a lot of challenges that a host city faces. This group recognized such difficulties, and in order to make the Olympic more successful and sustainable, they have analyzed how the Olympics plays a role in social, environmental and economic aspects. 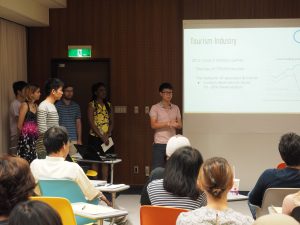 4. Preserving Japan through Sustainable Tourism (A Study for the Japan Tourism Agency) 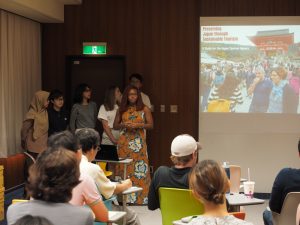 This group consists of two American, one Mongolian, two Indonesian and one Japanese, and I have seen them exchanging their travel experiences in Japan. (This is a group of students enjoy traveling in Japan, so it was not a surprise that this group focused on the tourism in Japan where the number of tourists has dramatically increased in the recent years. 🙂 )

This diverse group first introduced cultural, social problems and environmental problems associated with a rapid increase in the number of tourists.  Some of the social issues they mentioned include tourists’ bad manners and  overcrowded buses. 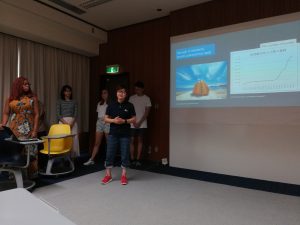 The group then introduced the uniqueness of Japan with its assets. They explained why Japan has been getting attentions from tourists and some tourist-spots that has been popular.

They emphasized the importance of providing information to tourists which would benefit both tourists and local people. Japan has assets not only in major cities such as Tokyo, Kyoto, and Osaka, but also in many other places. For instance, to see cherry blossom in Japan, Kyoto and Tokyo get overcrowded during spring. However, if tourists know that Okinawa has the earliest cherry blossom blooming in  Japan, which is January, Japan might be able to disperse the tourists in Spring from major cities. This group’s presentation made us realize again the importance of sustainability and how that should be applied to tourism. 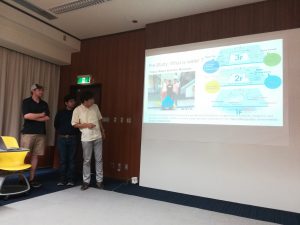 With the world population reaching 7.6 billion and keeps increasing, a risk of water wars is rising. In order to avoid water conflicts in coming years, it is necessary to recognize the importance of water and implement the efficient usage. 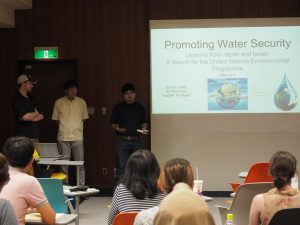 This group first introduced how water has distributed and used in different regions. China and India are the largest countries in terms of water usage. Especially, place like India where people rely a lot on groundwater instead of surface water,  their groundwater is running out and the immediate implementation of sustainable water resources has been called by some national authorities.

This group then introduced Japan and Israel as the examples of using water relatively in a efficient way. They acknowledged that Japan and Israel themselves were not necessary the best countries in terms of efficient water usage, but as the water being an important resource, they emphasized the importance of learning from each other and implementing sustainable water use in wider regions.

As a JSPSD assistant spent together with these students for 3 months together, I would like to congratulate everyone for completing their JSPSD2018 courses with successful presentations. Good job everyone! 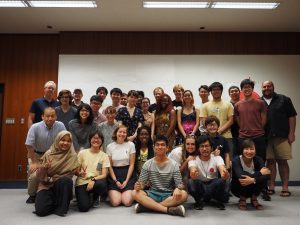 I would like to thank once again for all the professors and staff came for the presentation.