Tea ceremony has always been a symbol of Japanese tradition, culture and hospitality. Few people have the chance to participate in a tea ceremony but on this day, the GSEP students taking the Tokyo Tech Visionary Project class will have that great opportunity.

The esteemed speaker is no other than Ms. Rieko Kubota, a simple unassuming lady yet she exudes grace and elegance of a tea practitioner. It was also a bit of surprise to learn that she is also a researcher from the National Institute for Environmental Studies, Japan.  Hosting tea ceremonies and making a good cup of matcha is one of her passion. Her in the Tokyo Tech Visionary Project Class is about sadou, or in kanji “茶道” where the first character means “tea” and the second, means “way”, so together it means the “Way of Tea”.

Rieko briefly introduced herself and we have learned that she has been doing tea ceremony almost for 20 years now and it has continued for that long period because according to her, sadou has taught her so many things in life, and it has become a way of life. She has learned about professionalism and mindfulness or being mindful of what you are doing at the present. Tea ceremony  helps her relax and clear her mind from the clutters of everyday life.

She continued by telling the students about the origin of tea in Japan and the brief history of tea ceremony, detailing further how once tea was closely tied to Japanese politics during the Sengoku period. That was the time of Sen no Rikyu, the man that developed the way of tea, known for his simplicity, and wabi-cha style. Sen no Rikyu teachings perfected forms in architecture and gardens, art, and the full development of the “way of tea”. Rieko also explained some of the key elements of tea ceremony such as 茶室 “chashitsu” or the tearoom, 掛け軸 “kakejiku” or the hanging scrolls, 茶会, “chakai” or tea gathering,  抹茶 “matcha” or  green tea powder, and 茶道具 “chadougu” or tea utensils. In a photo of a tea room that she showed during her talk, the hanging scroll had the words “ichi-go-ichi-e” (一期一会), written on it, which means once in a life time chance meeting. She explained that in tea ceremony, these words are used to remind everybody that we should treasure every single opportunity to gather and have a tea together.

Rieko also talked about how they started the Matcha Anywhere activities. They hold tea gatherings, showcasing the Japanese culture while sharing a cup of Japanese green tea. Rieko is very passionate about this movement and at the end of her talk, she invited the GSEP students to have a cup of matcha and sweets with her. She showed the class how to make a proper cup of matcha and after that, everybody was eager to try the green tea that she have just prepared. After serving tea and Japanese sweets to the students, Rieko asked for a volunteer who would want to try to prepare a cup of proper matcha. Jinny, the student from Thailand volunteered and under Reiko’s supervision she made her first cup of green tea and served it to one of the students in the class!

Everybody had their first experience of chakai or tea gathering whilst enjoying Japanese sweets and matcha that was prepared by the gracious host and first-class tea practitioner, Ms. Rieko Kubota. The talk was informative and really enjoyable for the students. It is not every day that we meet and have tea with a first-rate tea practitioner in Japan. 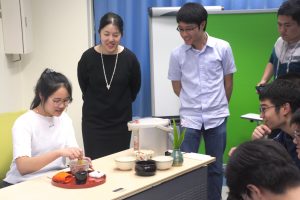 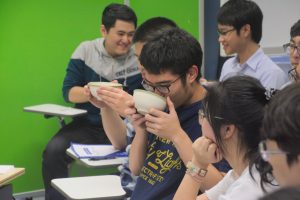